African Kingdoms Federation and AACID. <br> REFAI-NGO parcipate in the organisation of Summit​

Back To Home
Conference 18 September 2020

African Kingdoms Federation and AACID.
REFAI-NGO parcipate in the organisation of Summit​ 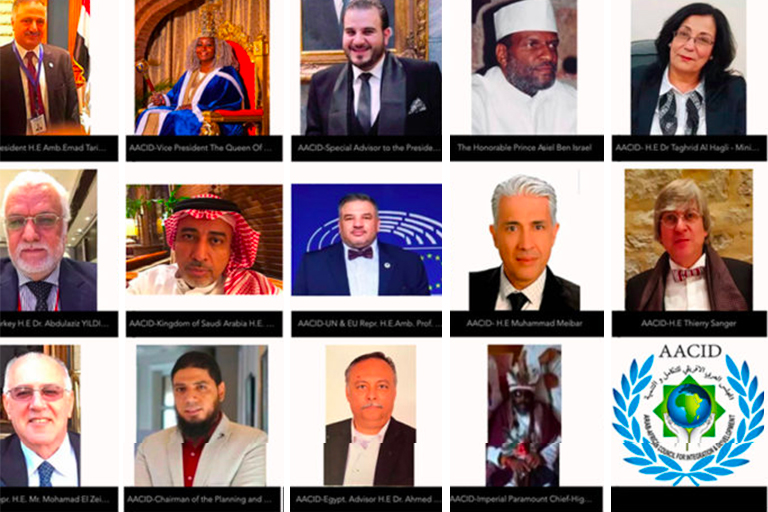 The Inauguration of The African Kingdoms Federation Sovereign House of KINGS Throne Parliament by Imperial Decree of the Kingdoms Sheba Mother Throne, will take place during the Summit. Parliamentary Crown Councils will be appointed.

The Inauguration by Royal DECREE of the World’s Mother Continent Kingdoms Alliance Royal Parliament with the inclusion of representation of the Economic Community of States, Nations, Territories & Realms of the African Diaspora Sixth Region (ECO-6) as an integral part of the ARC Alliance Global Community brings us full circle, as a united Africa. As a unified alliance, the Kingdoms and Royal Cultures stand as the oldest living symbol of the World’s common shared roots and history.

The 4th Industrial (Digital) Revolution will be a positive experience for many globally, but will also be extremely harmful and challenging for many, and will be particularly difficult for the kingdom communities that are not prepared.

We have a great opportunity at present towards building the Kingdoms in this new digital era, and empowering them to achieve Economic prosperity, Food and Water Security as never before, if we work effectively and efficiently in unity as One Great PARLIAMENT.

The African KINGDOMS Federation House of KINGS Crown CHIEFTAINCY (HOCC) will be comprised of 7 Crown Councils:

– The Crown Council of The Crown Administration MAKH Executives

– The Crown Council of The Crown Social Betterment Executives

On the first day of the 5 day Summit, on 18.09.2020, The Queen of Sheba III will present the Kingdoms Development Agenda with regards to Economic, Food and Water Security for the Kingdoms within this historic Decree. Such an agenda has never been presented in the history of the Kingdoms. Such a Kingdom Development Agenda is vital for the survival and upliftment of the Kingdoms in this New Era of the 4th Industrial/Digital Revolution. The details of the Kingdoms Agenda structure will be revealed within the presentation of the DECREE. All KINGDOMS should use this opportunity to register or update their registration in the ARC as Crown Council respective members of the General Assembly and by extension of the Alliance Community and its respective intergovernmental community Diplomatic Missions!

How Important Is This?

Normally Governments obtain funds in Millions and Billions of USD/EURO and are part of the Diplomatic Community Organizations such as the United Nations, the African Union, the Arab League, etc. The African Kingdoms Federation under its Throne of Thrones leadership has worked hard to create alliances with Global Financial/Funding bodies and Diplomatic Community Organizations for the benefit of the Kingdoms.

All Federation registered Kingdoms and Kingdoms Organizations in the ARC from the position of Throne Royal Heads of Kingdoms and Governments of Africa representatives have the opportunity to access all needed financial support.

Such financial support is strictly for non-political development goals, to see to the lands and People and development of each Kingdom in the context of the 4th Industrial/Digital Revolution.

Finance for development projects will encompass all economic sectors to achieve Food, Water and Economic Sustainability and Security pursuant to the necessary qualifications and requirements for said financial support.

As Royal customary law decrees, where the high throne is seated, we all are seated. And equally as well seated and represented within all of Throne Diplomatic portfolio in unity are the African Kingdoms Federation Crown Sovereigns HOUSE of KINGS General Assembly of the Crown Parliament.

Thus providing an integral representative voice within the Office of the World Peace Committee Diplomatic Mission as Kingdoms Members of the Committee 202 Countries. Arab League Nations community represented by the Arab-African Council for Integration and Development (AACID) and the World Organization of States for Safety and Peace Intergovernmental Parliament, and as such recognized and supported as a unified body.

What must we do to get all done?

WE MUST BE ORGANIZED and UNIFIED

The 10th Vicennial Summit 18.08.2020 is a sacred day that is relying on YOU The Kingdoms as anointed by Heaven to the Seat of RESPONSIBILITY in this 10th VICENNIAL process that started 200 YEARS ago. The Responsibility for the RENAISSANCE of the Kingdoms of Africa and THE AFRICAN KINGDOMS Dignity, Culture, Future and Survival as the Earth’s Kingdoms of the South rests squarely on YOUR shoulders.

What do we need of you?

What we need of YOU all is to now rise above all differences as we enter this new time. Discard the differences in the reality we left behind before the world as we knew it CHANGED. As the world has changed, so too must we CHANGE.

We need all of the Thrones in support of this Development Agenda of Food, Water and Economic Security.

We as African KINGDOMS House Of KINGS can offer our Federation member Kingdoms, our Business Community, our Governments support in all sectors as Federation ARC Alliance. But WE MUST BE ORGANIZED and UNIFIED. The Kingdoms are rising, and as the sun rises and sets, we want all the Kings, Queens, Princes and Princesses on the Councils of the Parliament of the HOUSE of KINGS to take their place and pledge their undying support and loyalty to the accomplishment of the Agenda of Food, Water and Economic Security for all of the Kingdoms.

Seats will be granted to all ROYAL attendees on the 18-22.09.2020 as representatives of their Kingdom and People.

You must be registered with the African Kingdoms Federation-AKF via Federation ARC eHeadquarters at email https://african-kingdoms-federation.com

The Deadline for registration in the Federation ARC eHeadquarters is the 17th of September 2020.

With respect to the United Nations 2015 – 2024 Decade of People of African Descent our Summit Highlight is the African Kingdoms. Africa is the Cradle of Humanity and an integral part of our global history. We celebrate the African Kingdoms 200 years and the 10th VICENNIAL of the efforts and important events leading up to this time and celebration.

We also celebrate the internationally accredited United Nations Sustainable Development Goals (SDGs) Partners and the African Kingdoms Federation (AKF) NGO as recognized by the United Nations Department of Economic and Social Affairs (DESA) in its Registry. The AKF led by the Throne of Thrones is recognized both presently and historically as the Royal Throne and Kingdoms Organization on the African Continent, led by the Sovereign Imperial House of SHEBA, the ancestral Mother Throne of The Kingdoms.

AKF Royal Events To Be Highlighted:

The Queen of Sheba 20th Throne Anniversary and Birthday.

The AKF 2000-2020 creation of the ARC and The 11th Anniversary of the ARC at the dawn of the 4th Industrial/Digital Revolution.

The recognition of the 2020 New Era start of the 4th Industrial Revolution, the Digital Era and its Affect on the AKF/FOS.

The Decree and Inauguration of the House of Kings and the House of Chieftaincy for the purpose of the survival of the AKF/FOS during this pandemic and the fulfillment of HIM’s Food, Water & Economic Security Development Agenda for the AKF/FOS on the cusp of massive societal transformation due to the 4th Industrial Revolution.

The Decree and launch of a Special Diplomatic Agenda with the inclusion of the gathered Royals and Special Invitees of the Queen Of Sheba for the fulfillment of HIM’s Food, Water & Economic Development Security Agenda in proactive response to the societal transformation resulting from the 4th Industrial Revolution.

The Commemoration of the 8th Anniversary of the Recognition of the Diaspora and their integration into the FOS.

The Recognition and Affirmation of the African Royal Kingdoms 1820-2020 Renaissance.

The Most Important Ceremony is the honoring of the struggle of the Kingdoms of Africa that has led to a decree and an inauguration that will take place at this Summit. We need all Kings, Queens, Princesses, Princes and Nobility at the Summit for this important inauguration, because it is AFRICA’S TIME.

Africa’s place is at the Global Head and not the Tail. United after all these years of effort, we can Now make a difference to Africa and Humanity.

We the Kingdoms have had many summits over these past few decades, however this Summit is Our First EVER gathering of our Kings, Queens, Prince, Princesses and Community in a new Era on a global leveled playing field, since our ancient History as MAA Confederation. And most importantly it is not with an aim towards wars against another but rather that of global progressive evolution as a united community against that which affects the global collective.

The inauguration of a present day Royal Parliament of THRONE Nations that works with the Executive Councils to oversee the implementation of the Development Agenda, as an integral part of the Alliance Royal Community-ARC, a new era of progress and cooperation will be ushered in.

With the purpose of this Development Agenda successfully implemented at all levels, without fear or favor towards the achievement of the Correction of the IMBALANCES of the Created POVERTY, Discriminations and Racism, a new era will begin.

And with this New Era, Our Goal of Global Unity of purpose of all Nation states can only be realized with a GLOBAL RESET, that respects the needs and aspirations of THE PEOPLE OF HUMANITY.

We look forward to seeing you all at our African Kingdoms Federation international summit with the Arab-African Council for Integration and Development, in collaboration with the World Peace Committee (202 Countries), World Organization of State Intergovernmental Parliament for Safety and Peace, the State of the African Diaspora, and the ARC Alliance Royal Community. Which includes the Royal Kingdoms Mother Throne Queendom of Sheba Diaspora Kingdom Kasambu Royal Nations of The Americas represented by the interim Crown Prime Minister and Deputy-Prime Minister as an integral part of the 2020 INTERNATIONAL SUMMIT on Globalization 4.0 ”The RESET – 4IR EARTH SUMMIT 2020′ of The 4th Industrial/Digital Revolution.